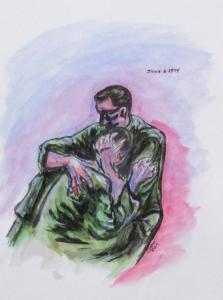 As part of my personal D-Day celebration, every year I watch war movies based on the event. In particular I re-watch “Saving Private Ryan” and
the 1960’s movie “The Longest Day”. This year I re-watched the PBS series “The War”. It seems like every time I watch that series. Something new,
a fact or a personal story is noticeable.

With the third or fourth episode a new fact was made very clear and chilling. When the paratroopers were sent in June 5, 1944, many of the
men lost their lives due to complete blunders. There was low level cloud cover and so the pilots missed their drop zones. A very large number of the
planes flew to low and the men jumped without their parachutes opening.

Have you ever cut into a pumpkin, gourd or watermelon? It emits a very distinct sound! The next time you’re upset about the stop light not changing quick
enough, or the slow cashier at a store.

Think about June 6 1944, and ripe pumpkins hitting the ground!